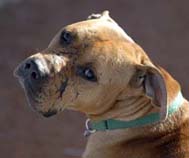 For those of you not familiar with the term “Vicktory Dogs,” it’s in reference to the rescued dogs from the notorious case of Michael Vick’s fighting dog operation. Lucas, the only dog the courts deemed unadoptable, was to live out his life in the care of Best Friends. Ironically, Lucas was the most social and well-behaved of all the dogs rescued.

We wanted to share the heartwarming story about Lucas, the story of a champion, but his greatest victories were outside the ring. He won the hearts of the caregivers at Best Friends, and taught the world about the integrity and depth of character that is a dog.
Read the story of Lucas.