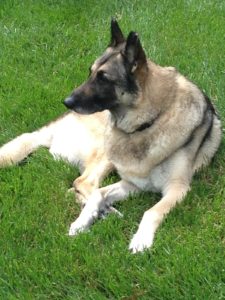 Wonder dog you ask? Well, he was a wonder when we rescued him eight years ago this month from MOGS at the age of three. A gift for our son who was eight years old at the time, he quickly became the character of many “wonder”ful bedtime stories. Everything he did was hysterical as he came to us with no idea what life was about outside the tree that he had been chained to for perhaps several years.

With a heart of gold and a keen sense of curiosity, the adventures began. He had to learn things like how to get in and out of a car, climb up and down stairs, stay off the counter and not eat an entire pot of chicken soup and a stick of butter, and not jump up and knock you over! Most of all he had to learn how to walk on a leash. Unfortunately, I told our son to hold the leash a certain way one evening and Russell ended up taking quite a ride through the grass while King chased a squirrel. Well, Russell survived, I felt really bad and King has chased many squirrels since, but to no avail.

King has also been to the Price is Right! Yes, he rode a motorcycle, got lost, and bought a GPS at Walmart and was on his way. When he arrived, he won the big deal and brought home many fabulous prizes, all prizes our son wanted! This was a book written and illustrated by our dear Russell for a fifth grade school project. It is one of our most prized possessions still today.

King has spent his years enjoying the good life, the best we can give him. For most of his time with us he has enjoyed lake living on the weekends, living on a houseboat and enjoying his fur buddies on the beach and bon fires at night. Today, he is older and slowing down, but still the heart of our home looking as handsome as ever thanks to the “wonder”ful care he receives from his friends at Four Paws. From Debra, to Sydney, to Austin, to John, to Lynn and all the staff, we feel like they’re family. I can’t say enough about all the advice and support we’ve received from absolutely everyone that works there and how much it has meant.

Thank you for your continued kindness and gentle hand with King and thank you especially for all the generous work you do for the many rescues you support.