I’ve heard most every denouncement of raw food diets for dogs and cats during my years at the store.  The one that tickles me the most is that raw diets are a new fad!  Usually these comments are made due to a lack of knowledge about how our pets had been fed in the past.

Not so long ago, dogs were fed raw bones and scraps from their human’s diet.  This gave way here in the States, around the mid 1930’s, to feeding “processed kibble” when Mill owners realized that they could recycle their scraps, milling by-products and floor sweepings, with meat meal to create a diet for our pets.  So if you consider history, real food and bones are the true ancestral diet, while processed kibble is actually the new fad diet.

And why not?  It’s cheaper than real food, easier to feed (pour from the bag) and doesn’t require any thought really.  Processed food will sustain a dog or cat’s life, assuming it meets AFCO’s feeding standards for a balanced and complete diet, but your pets will not thrive on that diet, and many will suffer health issues due to eating processed food every day for every meal of their lives! 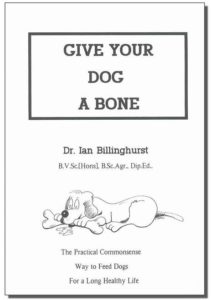 Dr. Ian Billinghurst, an Australia veterinarian back in the 1970’s, was one of the first, if not the first, to witness how raw fed dogs decline on commercial foods.  His first book, Give Your Dog a Bone was published in 1993, and in it he examines why raw fed dogs are so healthy compared to those fed a kibble diet.  I encourage everyone to read this book for a basic understanding.  His subsequent publications, Grow Your Pups With Bones and The BARF Diet, (biologically appropriate raw foods), continue to build upon his premise that raw food is the best diet to feed and both books include suggested meals.

Objections to feeding raw
Some of the concerns I’ve heard are that raw diets are too high in protein and that excess can lead to epilepsy, hyperactivity, or kidney damage.  But what constitutes high?  Data showing excess protein causes renal damage were results derived from test animals with pre-existing renal deficits that were fed levels of protein that induce uremic poisoning.  Another early study denounced high levels of protein as harmful to dog’s kidneys but that study was done on rats.  There are differences in the way rats metabolize protein.  So do your own research on this subject before discounting a diet high in “quality” proteins for your dog.

Another objection is the potential for bacterial contaminants present in the meat such as E Coli, Salmonella, and Listeria to infect or kill your dog or you.  Does that mean we should never handle raw meat?  Maybe it means we need to treat all meat as if it were contaminated and handle it accordingly.  Using scrupulous meat handling and sanitation practices will ensure that we aren’t at risk.  As for your pooch, a healthy dog can ingest the negative bacteria and not suffer any ill effects.  As a matter of fact, most dogs and cats have some negative bacteria in their system all the time.

Compared to us, dogs and cats have relatively short digestive systems meaning foods are processed quickly before harmful bacteria has a chance to multiply and cause problems.  Carnivores have a very high level of acidity (an acid bath) that allows them to break down raw meats and bones and acid is hostile to bacteria.

We’ve all seen dogs eat garbage, dirt, rotten foods, decaying carcasses without ill effects.  Nature did not evolve carnivores to eat a diet that would kill them.  Of course we aren’t suggesting you feed spoiled or contaminated foods, but instead a balanced and complete raw food diet that consists of high quality USDA inspected and approved meat and bones.

One final objection is cost.  Yes, real food costs more.  But, would you rather have a healthy pet or a wealthy vet?

Features of a wolf’s diet
Consider this, we know that genetically dogs are almost identical to wolves, specifically the grey wolf, and so it follows that a wolf’s diet should benefit our dogs as well. 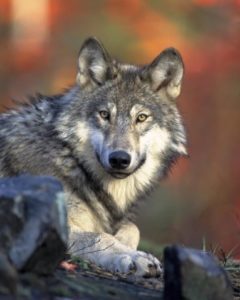 On September 25, 2004, Dr. Mech presented a “what wolves eat” seminar in New York.  Dr Mech, one of the world’s most respected experts on the wolf has studied wolves extensively and includes much research on the interactions of wolves with their prey.  In his talk, Dr Mech explains that there is much we do not know about human dietary needs let alone a wolf’s diet, but he goes on to describe what he has witnessed during his studies and how it relates to our domesticated dogs.  Wolves, like dogs, are opportunists and as such will eat whatever they can when they can.  Their diet varies based on region, but he acknowledges that they have a preference for freshly killed meat.

So, what does the average adult wolf eat?  Their preference is for fresh meat and for internal organs.   Organs are their top choice!  Wolves will also remove the guts and shake them a few times to get rid of whatever they contain and consume the intestines.   Wolves do eat fruits, nuts and grass on occasion, but meat is their primary food.  Wolves would eat eggs all the time if available.  Dr Mech estimates that vegetation makes up less than one percent of the food of wolves worldwide.  If they are really hungry, wolves will also eat skin, fur, hooves, and whatever remains of the carcass.

When wolves live in the conditions in which they evolve, with lots of land and prey to hunt, these ancestors of the modern dog are among the fittest, most powerful, most intelligent, vital, healthy animals.  While Dr. Mech was careful not to be drawn into any speculation about the appropriateness of using the wolf diet as a model for the dog’s diet, he would say that if one uses a wolf as any kind of model for the dog, then the only one it makes sense to use is the gray wolf from which the modern dogs was domesticated.

Some proponents of the raw food diet try to replicate wolf’s diets as exactly as possible.  Others regard the wolf diet as a good starting place, with the addition of variety of proteins, poultry, eggs, vegetables, and even vitamin/mineral supplements.  The one thing that most fans of the “natural” diet agree on is that diets that contain a high percentage of carbohydrates in the form of grains and starches are not appropriate for canines of any kind. 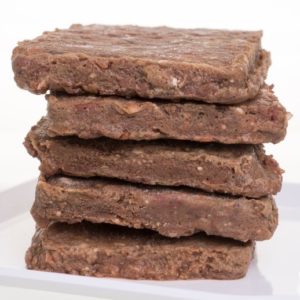 We have outlined the features of a natural diet, but what about the benefits they provide.  Well for starters, your dog or cat will develop a healthy coat; its skin condition will improve.  You will also start to notice clearer eyes, cleaner ears, less itchiness, dryness, and flaking of the skin.  Your dog or cat may shed some pounds, attributed to a higher protein and low carb (or carb free) diet.  Your dog’s behavior may improve and his health definitely will improve.  You may find that previous “diseases” clear up without the use of steroids and antibiotics.  And feeding a low carb or carb free diet, will reduce the risk of the onset of diseases such as diabetes, kidney disease, intestinal disease, and cancer.  Your pet’s poop will greatly reduce in volume and it should not be as smelly as when they were fed kibble.

Precautions on Feeding Raw Diets:
Other than scrupulously safe food handling practices and sourcing your raw from a reputable company, there are not a lot of precautions to take.  If your pooch is new to raw, mixing in a little with their regular diet will help transition their pallet from well-done processed food to raw.  Sometimes we suggest slightly cooking their new raw meal, then cooking it less and less, until they consume their new raw diet with gusto!

And if you are concerned, to the point of refusing to feed raw due to the possibility of E Coli, Salmonella, Listeria, you can feed one of the prepared raw food diets that has undergone high pressure processing, known as HPP.   By conducting this high pressure cold pasteurization, the negative bacteria referenced above is removed.  I do encourage my customers to always feed an HPP’d raw if they have elderly people living in their home or very small children, as their immune system is either compromised or not fully developed, and if your pooch decides to give them a big smooch after eating, then they could be at risk for contamination.

Some Final Thoughts
So yes, when asked what’s the best diet for my dog or cat, I always respond with raw, of course!  But I also recognize that for various reasons, some owners just won’t do raw or cannot do 100% raw.  And sometimes, a dog or cat just doesn’t do well on raw.

In those cases, I suggest they try adding cooked meat to a prepared base, making the meal balanced and complete.  I also might suggest feeding freeze dried food.  Either of those options still gives you a very healthy diet when compared with kibble type processed food.  And if budget is a major concern due to the number of pets in your home or due to the sheer size of your pets, then try removing 25% of the kibble you feed (only feed a high quality dry food, preferably one low in carbohydrates with high quality meat and fat) and replace it with raw food.  Even that 25%, more if you are able, will provide major health benefits.

Ultimately, what you decide to feed your pet should be a decision based on facts and not fears.  Do your own research and come up with what’s best for you and your pack!